“I reflected upon the reflections on the water, like the fishermen do.”
Willem de Kooning

Aravishing arrangement of color, line and form, Willem de Kooning’s Untitled VII is an exquisite painting from 1981, brimming with the ephemeral qualities of sun, sea and sky. One of only fifteen canvases that de Kooning would create during this transformative year, Untitled VII is flooded with glorious North Atlantic light, where lush passages of luminous yellow are paired with lyrical, arcing blue ribbons; these swirl and loop across the surface, some made in a single stroke, others widening out into flat planes. Evoking the bucolic splendor of his home on the East End of Long Island, the painting is also a magisterial ode to paint itself. Pushed, pulled, scraped and brushed, the gestural force of de Kooning’s marks are alive with the artist’s process—a testament to the vigor of this seventy-seven year-old artist who would go on to create some of his greatest paintings during this, the final chapter of his life.

“When he started doing those paintings of the eighties, the light was pouring out,” the artist’s friend and former painting student, Joan Levy said at the time. He asked her “What do you think?,” to which Levy replied, “They’re so ethereal. It looks like you died and went to heaven.” Agreeing, de Kooning said, “Yes, that is what I was going for” (J. Levy & W. de Kooning, quoted in M. Stevens and A. Swan, De Kooning: An American Master, 2004, p. 591). Untitled VII is indeed a light-pouring-out painting, suffused with radiant yellow passages that have been thinned-down and glided onto the surface in wide strokes of the brush, commingling with the bright white underlayer that de Kooning now brought into his paintings in ever greater frequency.

The fleeting qualities of light as it streamed into his large and airy Long Island studio fairly obsessed the artist, as did the Atlantic Ocean in all its moody permutations. De Kooning infuses these evanescent qualities into Untitled VII, creating a powerful, visceral work. The eye follows his brush as it zig-zags, loops, arcs and flows–at times scraped, built up and worked wet-into-wet. More often than not, the subtle contours of the blue ribbon-forms allude to the curvature of the female body, as the painting remains powerfully alive with the energy and thrust of the artist’s brush.

One day in the spring of 1981, Willem de Kooning picked up his brush and embarked upon what would become his final series of paintings. He was nearly 77 at the time, and worked steadily throughout that year, ultimately producing fifteen large-scale paintings, to which the present Untitled VII belongs. This body of work (1981-82) forms a bridge between the effervescent, energetic canvases of the late 1970s and the leaner “ribbon paintings” of the later 80s. It was a fruitful period which found de Kooning re-energized, communing with his own past work. “Fewer components jostle for attention [in this body of work],” the New York Times art critic wrote in 1994. “Sensations of bumping, layering and the piling on of experiences are all lessened. Instead, ribbons of color undulate and spread out, introducing a thoroughly engaging lyricism” (P. Braff, “A Hometown Tribute to de Kooning at 90,” The New York Times, Sunday, July 3, 1994, p. 13).

Untitled VII was painted in de Kooning’s East Hampton studio. This was a huge, light-filled space with twenty-five foot ceilings and a short bike ride to the nearby beach at Louse Point. At the end of the day, de Kooning would ride his bicycle over to the water and contemplate the light as it dappled over the slowly rolling waves of the Atlantic, perhaps thinking of his childhood home in Holland and how far he had come since then. These daily encounters undoubtedly influenced his late work, especially the palette, luminosity and flowing lyrical ribbons in Untitled VII. Indeed, Klaus Kertess has written that “the artist’s ocean-inclined paintings are among the most powerful works created during this period. […] The undulating flow of the sea’s reflections, the glistening flow of paint’s liquidity, and the neuronal flow of images in his consciousness form a stunning union” (K. Kertess, “Further Reflection,” in Willem de Kooning: The Last Beginning, exh. cat., New York, Gagosian Gallery, 2007, pp. 17 & 13). 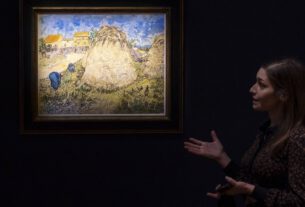 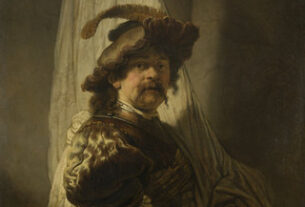 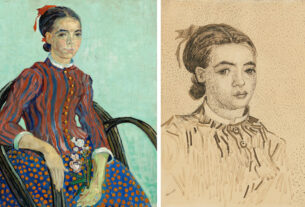